In July 1788 Samuel Wedgwood was living in France and wrote a long loving letter to his father in Staffordshire in which described his life in Paris and a visit he had made to the Sèvres factory.

Samuel was the second son of Thomas Wedgwood; he had grown up on the Etruria estate where his father was partner with Josiah Wedgwood in the production of useful earthenwares.  Thomas Wedgwood intended to leave the partnership to develop his own business, he was a relatively wealthy man and in 1788 owned three factories in Burslem including the Hill Works and the Churchyard Works.

View and download a transcript of the letter here

In his letter Samuel effusively writes It gives me great pleasure to see that proof of Fatherly Goodness in you in the offer of taking me into partnership with you be assured that I shall be assiduous as possible in getting you all the information in my power for which end I have been to Seve.

His visit to Sèvres involved a tour of the principal workshops and showrooms which Samuel describes vividly, sometimes with admiration and sometimes with amusement.  He is particularly taken with the size of some of the Sèvres productions and was astonished to see two enormous vases of 7½ feet high without the pedestals … which surpass everything I have ever seen for their beauty & workmanship.    He was less impressed by the method of making plates, writing, they squeeze a plate before us at which I could scarcely forebear laughing and goes on to describe the process concluding I believe we can make at least 2doz plates while they are making one.  The description of his visit and his assessment of Sèvres takes up two of the 4 pages of closely written text.He concludes by mentioning his efforts to become fluent in French, German and Italian, no doubt anticipating a career in international sales for his father’s pottery.

He discussed the costs of living in France and the trade with England which was in a declining state.  He closed with there is nothing gives me greater pleasure than to hear of your increasing Welfare, which thank Heaven may still increase & preserve is the Prayer of Your most dutifull & affectionate Son S. Wedgwood.”  Thomas Wedgwood died tragically 3 months later, drowned having fallen in the canal walking to his home from the Etruria factory.  Samuel joined his brother Ralph in the pottery business, but he too died tragically,  at the age of 21 in January 1790. 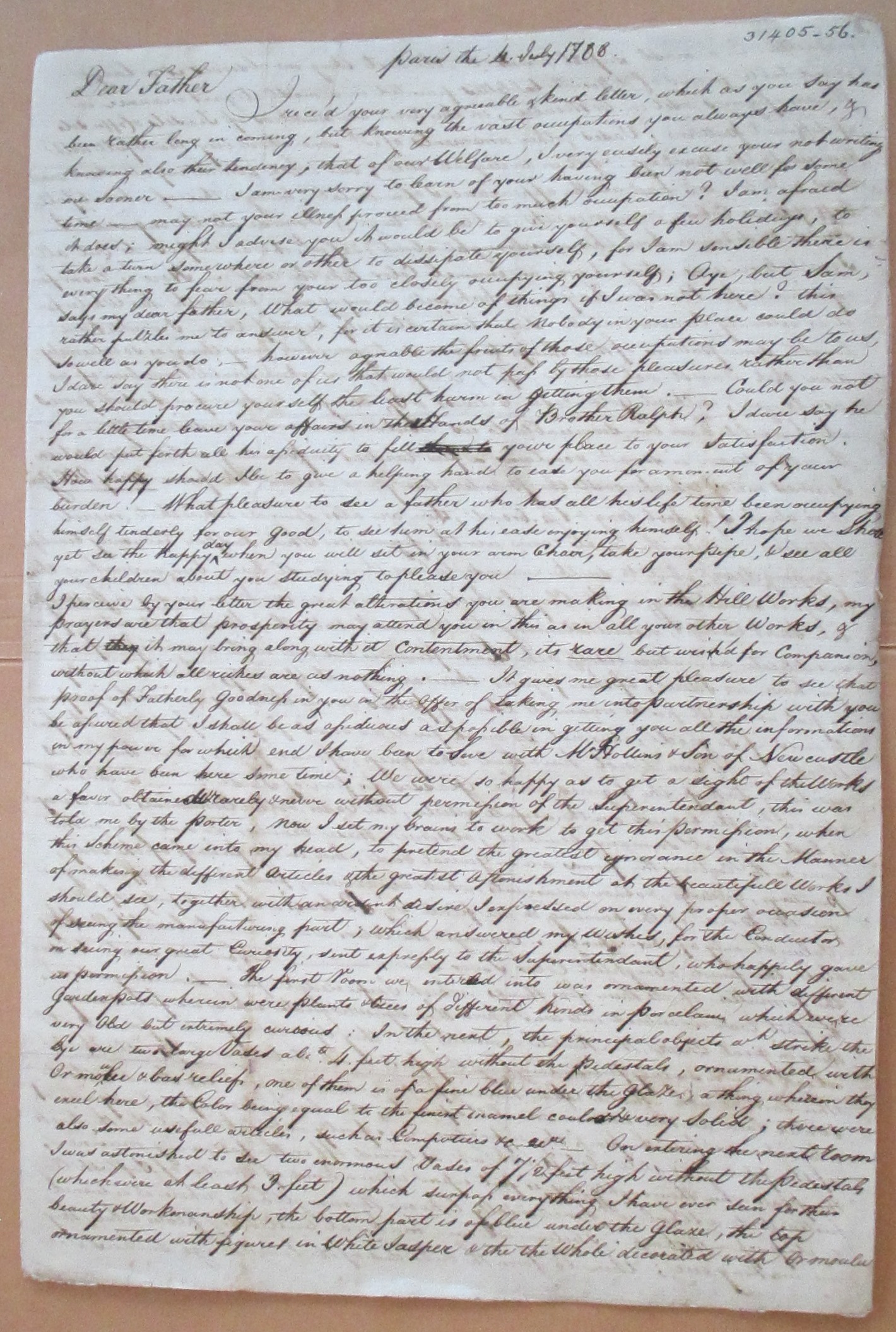